🚫 You tell yourself that you just don’t know 𝙩𝙝𝙚 𝙧𝙞𝙜𝙝𝙩 𝙥𝙚𝙤𝙥𝙡𝙚 or have the 𝙧𝙞𝙜𝙝𝙩 𝙗𝙖𝙘𝙠𝙜𝙧𝙤𝙪𝙣𝙙 to land the accounts.
🚫 You think “if only went to the 𝙧𝙞𝙜𝙝𝙩 𝙚𝙫𝙚𝙣𝙩, or met the 𝙧𝙞𝙜𝙝𝙩 𝙥𝙚𝙤𝙥𝙡𝙚, or attended the 𝙧𝙞𝙜𝙝𝙩 𝙨𝙘𝙝𝙤𝙤𝙡, 𝙏𝙃𝙀𝙉 I would land accounts.”

You want more money. 💰
You want to land more accounts. 📈
But the more you apply to jobs, the farther away they seem to be. 😓😓😓
Confidence dwindles. The spark settles.
Somehow you always end up with “just enough.”
But that’s never “enough.”
The sense of lack and not-enoughness is pervasive.

I understand that for some who would kill to have the clients I have, this photo might be triggering. My dolled up bathroom selfie at a posh charity networking event 💅
“Well she just lands accounts because she’s pretty.”
But if this is your trigger — that some were just born luckier than you,
then there is something major for us to decode here. 💯

You can no longer use “not having the looks, connections or resources” as an excuse.
Because I ASSURE YOU, that is NOT the problem.‼️
And thank god it’s not.
Because that means there’s something we can do about it. ‼️🤑⚡️

I’m not messing around with you guys —  I’m about to put an end to this victim mentality. …this thinking that I don’t have enough
that benefits NO ONE!!

2022 is time to step into who you are as an entrepreneur. It’s time to land accounts.
And its time to feel REALLY fking good about it. 🚀

We’re doing this together. Comment on IG if you felt this. 🔥🐅
DM me for info on how to play. 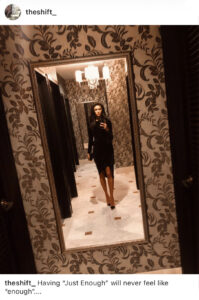